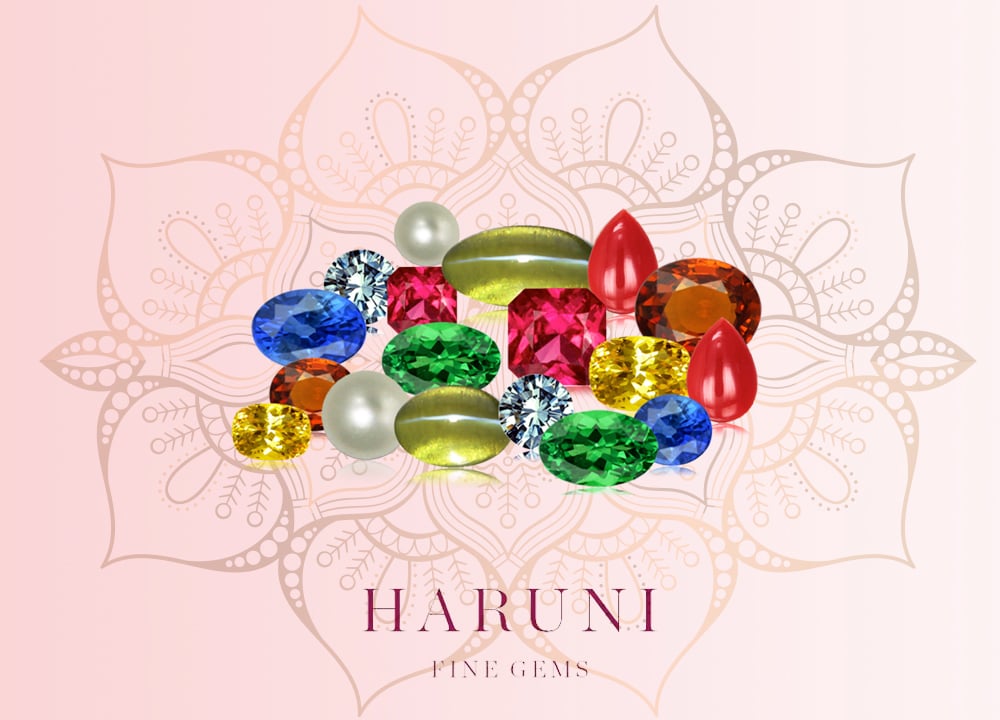 For today’s consumers, gemstones are more than just an attractive investment. Fine gems are desired for their diverse beauty, their historical significance, and even their colour-based properties.

Whether you are drawn to a gemstone because it is associated with certain healing powers or you are buying your beloved an engagement ring that features the latest cutting-edge jewellery trend, it is helpful to approach the purchasing process with care - especially if you are buying online.

This complete guide to gem certification is designed to help you avoid the common pitfalls of buying fine gems. More importantly, you will be more apt to make a wise purchasing decision and to be delighted with your purchase. 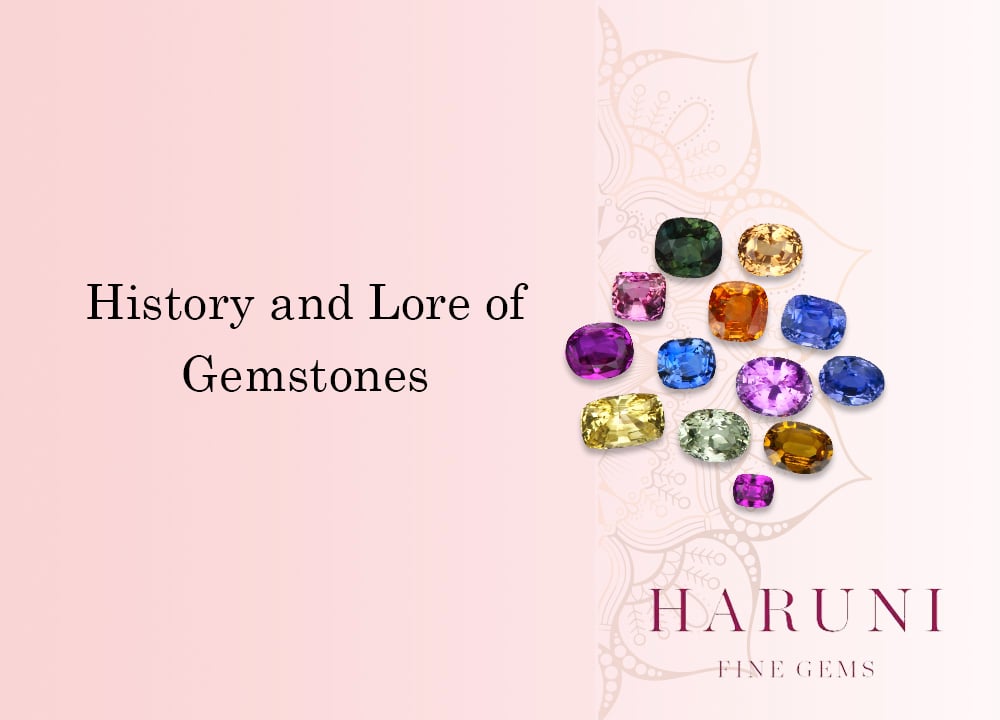 Part I
History and Lore of Gemstones

People have been fascinated with gemstones for centuries. While their external beauty plays a key role in our fascination with gemstones, there are many reasons why they captured the attention of our ancient ancestors. By understanding how our gemstones were viewed and used ages ago, we can better understand why sapphires, rubies, diamonds and other fine gems continue to grow in popularity.

Gemstones have long been revered for their protective properties. Sapphire, for instance, was used thousands of years ago by the Etruscans and is believed to shield kings from harm. Sapphires were also worn to protect people from poverty, dishonesty, and fraud.

“The earliest record of a man giving a diamond to a woman for her hand in marriage was in 1477 when the Archduke of Austria gave one to Mary of Burgundy. Now, more than 500 years later, diamonds are still the most popular gemstones in engagement rings.” - Gemological Institute of America (GIA)

Traditions play a key role in the popularity of gemstones today. For example, if you have ever wondered why the diamond is the most popular gemstone, then consider the fact that diamonds have been the gemstone of choice for a man asking for a woman's hand in marriage since the 1400s. In keeping with this tradition, diamonds continue to hold court as the gemstone of choice for engagement rings today.

Gemstones were often purchased because they were believed to possess the power to reduce pain or improve a person's health. While today's savvy consumers are more apt to purchase gems for other reasons, some buyers continue to choose gems because they were believed to offer specific healing powers. Amethysts, for instance, are still believed by many to relieve symptoms related to insomnia, circulation, and pain-related disorders.

In addition to the properties outlined previously, gemstones were often selected based upon the qualities associated with their colour. For instance, emeralds were worn by women who wished to conceive because of green symbolized fertility and life. Rubies, on the other hand, were associated with wealth and power, making them a popular choice to adorn the crowns of ancient royalty.

Bookmark and Get Your Gemstone Guide Book

Please bookmark this page, as we will be adding resources and links to it on a regular basis.

You might find it useful to download this guide, or pages from it, to keep offline to refer to. Please click this link to get your free copy. 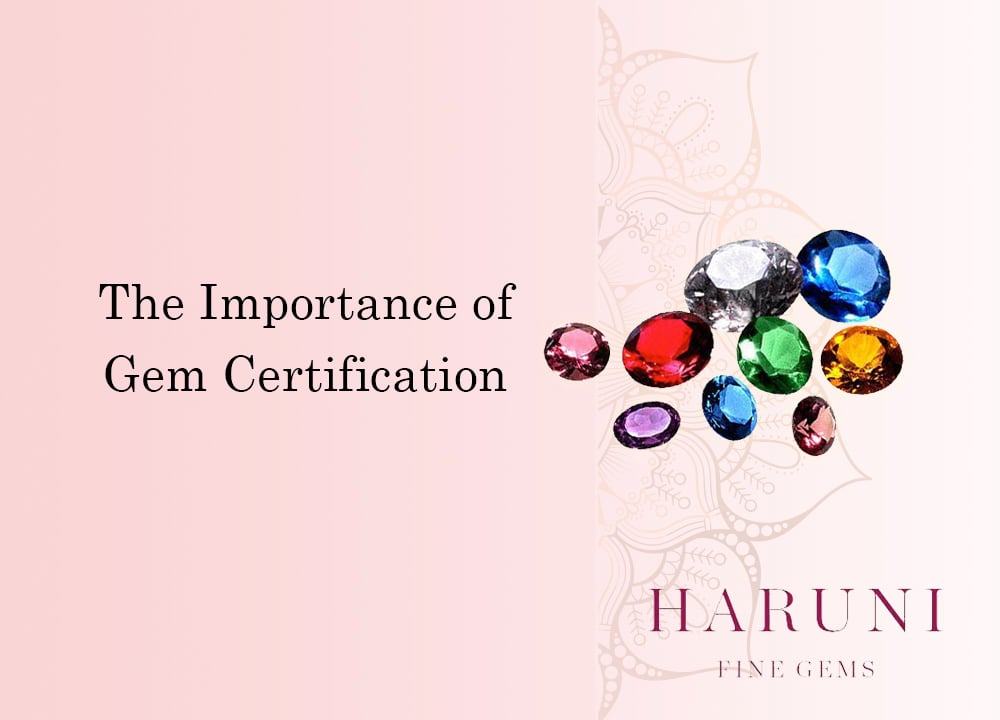 The wide variety of gemstones available online make it an exciting place to find the perfect stones for your jewellery collection. You can find precious stones such as diamonds, rubies, emeralds, and sapphires, as well as opals, garnets, amethysts, tanzanite, quartz, pearls, and rare stones you might not find easily offline. Although you might be able to find a raw, uncut stone, you also have endless options for shape, cut, and color when buying gemstones online.

The Critical Role of Gem Certification

People who are new to buying fine gems may wonder why the certification process is so important. There are three primary reasons why gem certification is so critical, especially when purchasing gemstones online. They are as follows:

It is important to note that not all certificates are created equal. Ideally, the gemstone you purchase should be certified by an accredited institute such as the Gem Reseach Swiss Lab (GRS), or the Gemological Institute of America (GIA). These institutes have laboratories with the tools and expertise required to properly grade fine gems. They are well renowned by jewellers on every continent and offer a consistent approach to the certification process. 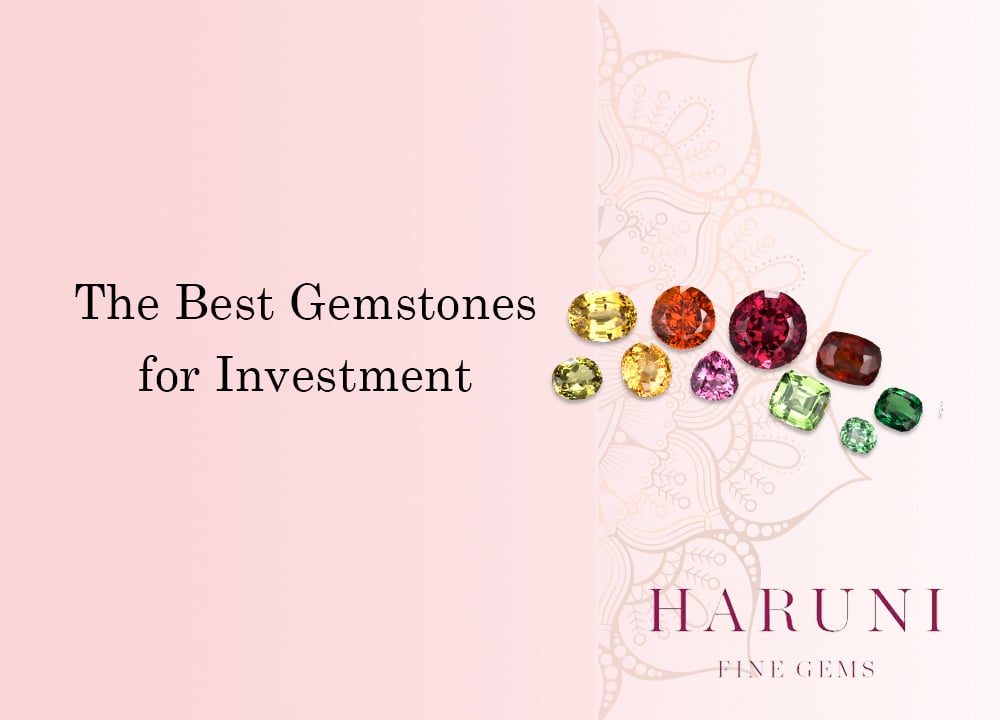 The Best Gemstones for Investment

Now that you have gained an appreciation for the history of gemstones and the methods used to authenticate them, you may wonder which gemstones are ideal from an investment standpoint. While there is no magic formula to apply when investing in precious gems, you should always consider a gem's aesthetics, its durability, and its scarcity. Gems that are brilliant, highly durable, and rare typically yield the highest return on investment.

“Historical values of colored gemstones suggest an exponential increase in value. While diamonds have been marketed well and have become a well-known investment proposition, colored gemstones are relatively lesser-known but pack in more punch than the sparkly diamonds, their gravity-defying per carat sale values overshooting diamonds by several notches.” - Abhijita Kulshreshtha, Gemstone Advisor

While the media and leaders in the entertainment industry frequently portray diamonds as the stone of choice for investors, it is actually the coloured gemstones that frequently provide a higher return on investment. Rubies, sapphires, and emeralds are all good options for potential investors. Jade and alexandrite also yield an impressive ROI.

As you compare online jewellery stores, make sure that you enquire about the certification process. Request confirmation that your purchase will be accompanied by an official certificate. More importantly, make sure the certificate was issued by a reputable agency. Beware of companies that reference a "certificate" but refuse to validate the issuer. 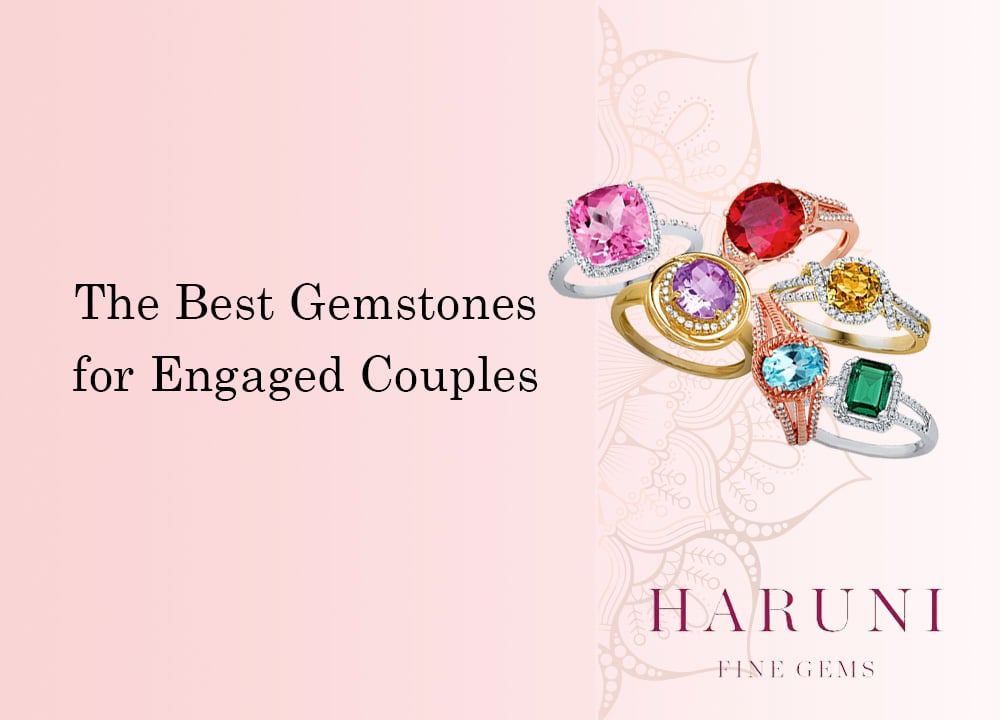 The Best Gemstones for Engaged Couples

An engagement ring symbolizes the love that two people have for one another. Of all the personal purchases made during courtship or marriage, it is viewed as the most significant. Selecting an engagement ring is a process that should never be rushed. Ideally, the buyer should allow plenty of time to review popular choices, while always keeping the recipient's personality and preferences in mind.

The Top 3 Gemstones for Engaged Couples

A gorgeous gemstone is the centrepiece of a stunning engagement ring. But unless you are a gemstone expert, it can be difficult to select a stone that is both beautiful and durable. When comparing gemstones, you can opt for timeless beauty, dazzling colour, or a combination of the two qualities. Here are three of the top gemstones for engaged couples:

The Keys to Success with Engagement Ring Selection

Just as no two women are exactly alike, no two engagement rings are exactly the same. The gemstone that you select for your fiance should effectively complement their personality, beauty, and style. Before you finalize your decision, make sure that you have considered these three things: 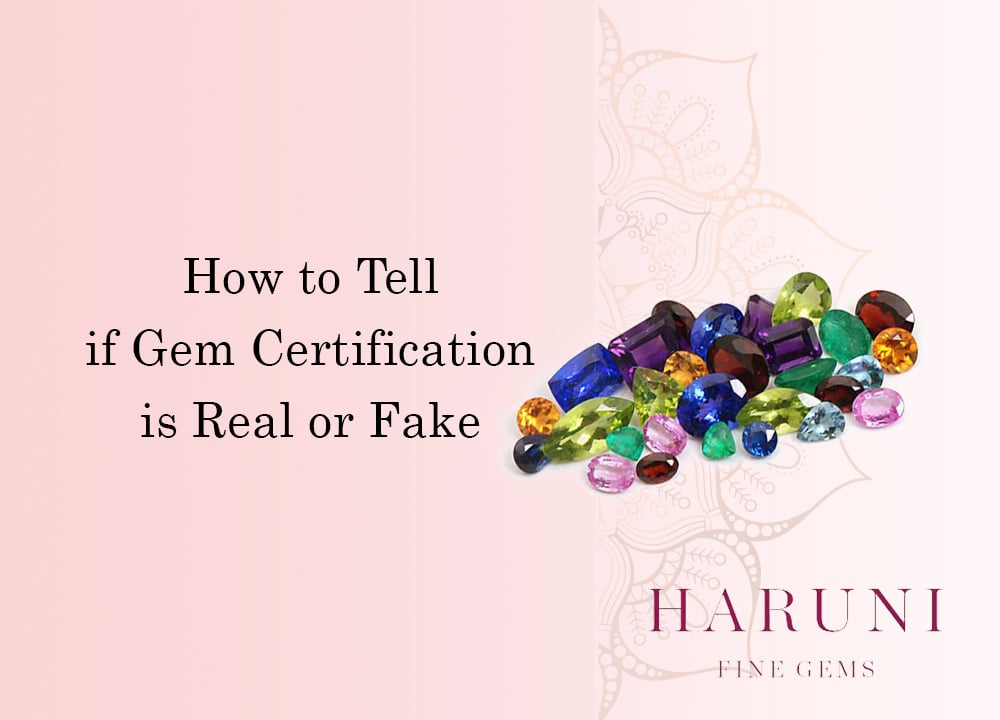 How To Tell If The Gem Certification Is Real or Fake

The good news is that there are some simple steps buyers can take to avoid falling prey to fake gem certification. By doing your homework and knowing the telltale signs of fake gem certification, you can narrow the thousands of online gem sellers to the stores with a proven track record of success delivering precious gems to buyers. Here are five steps to follow to help ensure that you choose a trusted, reputable online provider:

Step One: Look for sellers with an official company address and office phone

In today's digital age, virtually anyone can create a website that features images of gorgeous gems. In order to separate the legitimate online companies from the fraudulent ones, look for businesses that feature their complete business address and office telephone number in a highly visible location on their website. Be sure to verify the location using Google or another valid means of confirming business locations.

Step Two: Purchase the stone from someone with decades of experience in the gemstone industry

There is no substitute for experience in the gemstone industry. A seasoned specialist can often quickly detect fraudulent certifications and fake gems that may appear to be legitimate to the inexperienced buyer. Family-owned businesses and those that have prospered for multiple generations are often good choices.

Step Three: Know a few tricks of the trade for popular gems

Knowing a few insider secrets can help protect you from gemstone fraud. As you review gem options, look for signs that you are considering an authentic gem. Remember that tricks of the trade vary according to gem type, and a strategy that works well for one type of gem may prove to be useless with another type of stone.

Below are some tips for separating real gems from fake ones:

One of the best ways to protect yourself is to ask for a list of references. If possible, ask for names and contact details of customers in your city or state who have placed orders previously. Then contact each person on the list and ask to view photos or see the gems in person if you live in the same city. Finally, follow up by taking some time to check out online reviews submitted by verified buyers.

Step Five: Select sellers that ship with FedEx or Malca-Amit

The world's top online providers of fine gems use the world's top shipping providers to ensure that customers receive their gems safely and securely. Companies that use FedEx or luxury merchandise shippers such as Malca-Amit are typically committed to providing a safe, secure purchasing process.

Remember to carefully inspect your purchase immediately upon receipt. Even the most reputable fine gem providers in the world are not immune to mistakes. By following the steps above, you can help ensure that you are delighted with your purchase.

For thousands of years, fine gems have captured the attention of men and women across the globe. While buying trends may change with the wind, the beauty of diamonds, rubies, emeralds, and other fine gems remains resolute. If you are shopping for fine gems in London, or online, remember to follow the five steps above to protect your investment. The single best step you can take to guarantee your satisfaction is to shop only at reputable gemstone specialists that provide authentic certifications.

We invite you to contact us at Haruni to discover why serious buyers across the globe trust us to deliver the finest gems imaginable. For three generations, shoppers have turned to us to provide the finest gems certified by industry experts. We look forward to delivering a buying experience that is second to none, and to becoming your trusted source for all your fine jewellery needs.